Consider this post my farewell to veganism. I am writing it so that there is a single place to put down my ideas about the change and, I hope, the last place I’ll have to talk about this again. At the end of the day my change from being vegan has as much to do with the fact that I think that diets (and many other identities) just aren’t that interesting of a conversation as they seem to be to many people. Not to be entirely dismissive but I don’t really give a fuck what you do with your body. It is yours and is a major joy but it is your joy. The confusion about the difference between what is a personal thing and what is a political thing has long been a feature (not a bug!) of American radical politics. There are some other things to say too but all of that in its moment. 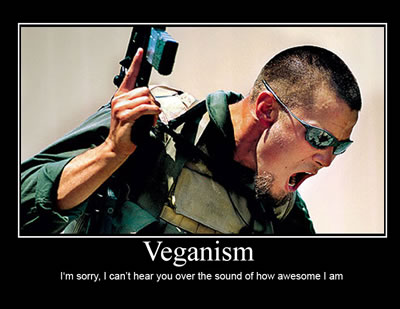 I was a vegan for a long time. Nearly half my life. I would be lying if I said that I wasn’t attracted to the extremism of veganism. I was, especially in 1991 when I started. While I didn’t really know anyone associated with the Hardline scene until a few years later (and then only in passing and when they were on their way out) the idea of drawing clear lines appealed to me then. More or less it still appeals to me but it looks so different now that it isn’t really fair to call it the same thing. I liked the idea of taking the extreme position and abiding by extreme living-values (beyond just talking-values), but at the end of the day content matters.

Animal rights advocates are basically right. The animal farming industry is a horrific murder machine that has turned humans into receptacles of garbage.

The problem is that they are only partially right. It is far more than the animal farming industry that has done this thing to us: animals & humans. I am going to nod my head in the direction of JZ because I don’t think that the real problem here is capitalism. I don’t believe capitalism gives a fuck whether we eat animals (more on that later). This is where I disagree with Murder of Crows and other post-vegan ideologues.

I believe the reason (or rather what includes the reason in such a way that I can accept) that humans have turned all life into a factory is civilization. Here I think of civilization as the ideology of humans that states that it is good & right for us to control the rest of the planet. Mostly we control the earth by putting cities on top of it but for the rest of the land we have created factories that serve cities. Civilization is the process by which we separate the technics (which provide us food, tablet computers, and plastic crap) from the nice cups of coffee next to bike paths. It is the particular way we have chosen to separate life as a statistical, mechanical, and political problem from life as what we do in the world. It is the massification of systems so that seven billion people can roam the land. Civilization is humanism on steroids.

It has been well over a decade since I moved away from this kind of a vegan-outlook. About as long as it’s been since I’ve really associated with vegans and their potlucks, cute little shops, and adorable outfits. But I continued to have a vegan practice long after my departure from vegan(ism) for the same reason that I do many things, I am very stubborn.

Naming a root cause, be it human cruelty or Civilization, does very little to rectify the situation, even if it feels like a radical pursuit. Similarly, subjectivizing the problem perhaps makes you a more interesting person (or, as likely, a very boring one) but it doesn’t externalize a solution. Here is where capitalism comes in. Capitalism loves subjective problems, as it always has a solution to them. Guess what it is?

Veganism was always a partial solution (to the problems of industrial animal production) but in the past 20 years I have seen it become something else entirely. It only even slowed down factory farming if you accept the premises of boycott politics. Even if you accept the most positive premise that Veganism was direct action against a system of domination, it merely demonstrated how meager and small individual acts are. Actions in isolation are always isolated and rarely understood as statement (“Against the death machine”) or implementation (“and we act against your system which we burn to the ground”). This is not a plea for a set of mass actions against the animal industry (which would be a partial target that will crumble with the fall of the petro-economy anyway) but a reason to pause in the story as we understand it now. Moreover even if Veganism was a radical act at some point in the past it is more (and less) than that now. It is also an identity, with all that that implies.

I have a close friend who has been vegan even longer than I was who is also very sick. I just saw a short video of her on her sickbed talking about life in the hospital. Every time she talked about food she also mentioned the food’s veracity vis a vis veganism: “Vegan chicken”, “Vegan Ravioli”, etc. This is boundary checking behavior. It is similar to how bats echo locate the world as they navigate. The world responds with an echo and the bat knows themselves through their flight through space. This form of identity-checking makes sense when you recognize yourself in the echoes. But what happens when you no longer hear a response?

It is self-evident that veganism has become a consumer choice on a field of exotic choices. In many ways it has paved the way to a variety of niche markets that have fueled the growth of companies like Whole Foods, Herbivore, et al. and phenomena like soy & gluten free diets, the predominance of “cruelty free” HABA products, etc. It goes on and on. We have, by making life choices as simple as what we buy, participated in a transformation of capitalism from mass to boutique. From “Any customer can have a car painted any color that he wants so long as it is black” to “An Army of One.” Hurray us!

What is radical about you?

One of the hardest questions a radical1 can ask themselves is what exactly differentiates them from the dominant culture they are differentiating themselves from? Perhaps the larger existential question is why exactly does having radical politics also entail a differentiation at all? But the problem of how we put our ideas into practice is a more serious one than the particular social problem of why we have to be seen doing it.

My political arc isn’t unusual, especially among my age group. I started in punk/hardcore, and gravitated over time towards the political(esque) DIY hardcore scene that talked all the time about the link between politics and practice. In hindsight I realize how preachy, pedantic, and unsophisticated it all was but, to be honest, I was too.

Then, I had to wear my flag all the time. I cared so much about what strangers and future frenemies thought of me that I always played dress up. Today, I don’t care. The fact that it took me so long to grow (the fuck) up is related to the same stubbornness that kept me a vegan for all of those years.

For years I argued for veganism as one of the few ways that a person could put the Beautiful Idea into practice. I was wrong. The Idea is just that. We can do anarchistic things, we can attempt to break the cycles of terror and violence that comprise nearly every aspect of this world, but nothing we do is pure. Every person has to draw their line and the sad part about that is how lonely and isolated that is. I sincerely wish that my process of thinking about veganism, from pre to post, wasn’t alone. But it was.

I do not relate to the idea that the world will be changed by the conscious acts of the oppressed. This is not because I ignore the history of the struggles that have come before, but because the compromised victories of these mass struggles were always immediately superseded by the monsters. Whereas the mass celebrates, the monsters prepare for the next fight. They change the terms of engagement. The only form of mass culture that maintains memory and unity is on the side of the dominating class. More education, purer activities, or better people aren’t going to change the fact that individuals can be (and are) bought off, that the kind of organization that won the 40 hour work week isn’t even going to achieve the (meager, pathetic) goal of full employment ever again.

The individual act of rebellion does not make a radical. Radical was just another rock-and-roll fantasy. Late 20th century counter-cultural (aka boutique) capitalist methods were effective at convincing naïve mid-western children that we could make a difference. We couldn’t. Not in the way we thought. What we are capable of is smaller and more interesting than the lyrics of Soulside or Dead Kennedy. The process of working through the apparatus of illusions has taken me to a place I haven’t heard much about from former peers. I don’t want bumper sticker politics any longer but I also don’t want to be an existential “used to be” either.

Where does that leave us

Perhaps I began this with the idea of presenting a cogent argument about why I am no longer a vegan. But it isn’t an argument at all. Arguing about stupid shit is exactly what I have wasted far too much of the last two decades on. Veganism is at this point the representative characteristic of those stupid fights, of that wasted time.

At the end of the day my actual diet will not change all that much. I live with a vegetarian and am not so starving for a meat diet that I’m going to chase down a different situation. Moreover I don’t want to eat the offal of factory farming.

Leaving veganism behind is more about leaving behind my relationships with the thousand moralists who I have met over the years, obsessing about food-as-product, basing my self-understanding on an identity that is synthetic, shallow, and unsustainable. In many ways my criticism of veganism is similar to the reasons why I rarely socialize with anarchists. I want to build something social but I don’t want to rely on tradition, identity, or laziness to do it.

Farewell veganism. You helped me be aware of how I inhabited the world and how the world inhabited me. You are still a big part of the life of some few people who I am fond of . You probably kept me honest in a way that I needed in my twenties and kept me sincere in my thirties. I will always remember the potlucks, the restaurants, and the health of certain vegans as being directly inspiring to me. I don’t blame you for my weight, unhealthiness, or bad teeth. I don’t blame you for my stubbornness either, but my future goals just don’t include you and it took a lot of thinking to give myself the space to walk away. I am not an ex-vegan or a post-vegan. I am a fellow traveler who goes a different direction with no acrimony or regret.

1 I’ve always hated the term radical but almost every other general term to describe a position-that-stands-against-the-existing-order-but-isn’t-as-specific-as-my-particularly-nihilistic-anarchist-position is even worse.

15 thoughts on “But What About the Vegans!?”