and not end up living a life of lonliness and desolation

I am a known bridge burner. This means that on several opportunities throughout my life I made choices that meant I lost friends. Not lost friends in that I got to pick them up again later, but lost friends in the sense that people who used to like me and want to be around me no longer wanted to be around me. When I say I have burned bridges I mean I have been entirely responsible for ending friendships that didn’t have to end. 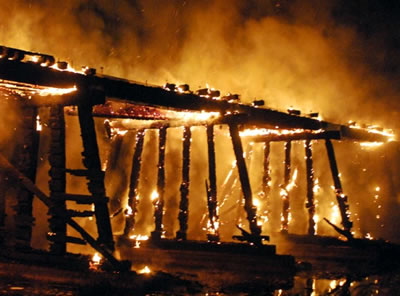 This used to be a point of pride. I took commitments to too many things like a type of oath. A type of modern demonstration of an old value system. An extension of this system was the idea, to put it tritely, that I was willing to draw clear lines: between good and bad behavior, between healthy and not healthy, and between me and others.

Obviously at some point I had developed a reputation. It was and is a deserved reputation. Terms like arrogant and asshole have plagued me for well over 20 years. These terms have made it easy for people to watch the bridges between us burn to cinders. But we’ll get into that in a bit.

The worst of this whole phenomenon has to do with loss and the fact that I am currently experiencing a great loss. One that I cannot share because everyone who I should be able to share it with his on the other side of the bridge. A burned out, irreconcilable, devastating bridge.

I briefly met Sara (nee Mike) Kirsch in the late 80s and became close friends, or at least friends, in the early 90s. I lived with Sarah for several years in the mid-90s. We stayed close or “urban close” for the next few years and more or less lost close contact with each other about 10 years ago. We would still see each other a few times a year but due to a major conflict having nothing to do with he and I haven’t seen each other in five or so years.

I traveled for a few weeks along a similar set of cities with John Henry West during their 1993 tour. During that time I fell in love with the conversations, music, and the people of this imaginary place that, as it turned out, I was only a visitor in. Sarah was central to this place. He represented somebody who totally disavowed their bourgeois background and meaningfully demonstrated what living for and in political music could be. Living with him for the two years that I did was an important rite of passage in my own life.

Sarah was also deeply important in terms of how I understood veganism. How it related to straight edge, is related to a political practice, and is an intentional act of eating delicious food. My own transformation away from veganism was largely possible because I no longer had access to interesting, engaged vegans who didn’t repulse me.

An equally important rite of passage for me personally was leaving the 20th Street apartment that I shared with Sarah (and others). I didn’t enjoy the Mission enough to turn down the opportunities that became available to me in the East Bay. More than that though, I was ready to challenge what I was beginning to understand as a form of orthodox thinking by members of the hardcore scene, including Sarah. Although I didn’t understand it that way at the time.

The great success of the political hardcore scene was the linkage of subculture to something bigger/greater. The sense that our potlucks were also an expression of a political practice, that shows weren’t just about music, was a deep challenge for me personally. Seemingly the next level of this challenge was a sort of dropping out from the capitalist system. Of course it wasn’t, albums were still purchased, rent was still paid, shitty jobs were still worked, but the idea that we were part of an underground and that meant being broke, all the time, was pervasive. But this wasn’t as important for me as it was for people who grew up in the suburbs. People like Sarah and the vast majority of the hardcore scene.

I was challenging the idea that the best/only way to fight capitalism was to do it as a destitute victim of capitalism. Obviously this is an overblown statement but the nature of radical politics is that subtle complicated personal issues tend to become bumper stickers by way of communicating them to others. As I was getting skills with the intention to use them also get a paycheck I was bumper stickered, not at first, not brazenly, is a sellout. This shallow understanding of how to live in this world and how to fight against this world confirmed that I had finally, painfully, outgrown the hardcore scene.

I wasn’t able to attend Sarah’s memorial. To do so would’ve hurt one person who really didn’t deserve it and probably would’ve ended badly generally. That bridge is gone. There are still people who don’t realize how much I miss them, how much I miss hardcore praxis, and how this burnt bridge is not about them. They probably expected to see me at the memorial but it was impossible.

I used to burn bridges and was proud for doing so. While it’s too late for my childhood, for a few hundred friends I’ve had over the years, I have more-or-less stopped burning bridges. They almost never represented the clear line, or the transversal of a line, to anyone else other than me. At great personal cost I have finally got it through my thick skull that I don’t have to sacrifice personal relationships every time I want to make a principled stand.

Today my life is filled with people. On a weekly basis I talked to more people than I used to talk to in a month. My life is no longer constrained by job, house, Facebook, or family. I have the kind of relationships I hoped to have when I was young. My friends and collaborators are interested, engaged, and critical, by which I mean lovingly hostile, towards me and my projects. I used to burn bridges because I believed that principled behavior required it. Now I realize that things are not that simple anymore and neither am I.

One thought on “How to burn bridges…”