In our unreal world, it is hard not to be overwhelmed by the invisible things that are easily confused with reality: fake controversies, confused priorities, hyperbolic rhetoric about inconsequential things. We become disengaged with the torrents that pass us by. Paper slows us down enough to engage in the ideas that we are talking about.

Many readers are likely to know that as much as I valorize print, in my daily life I also spend 12+ hours a day in front of a screen. My criticisms of the Internet generation are criticisms that I know all too well. They are criticisms of me and the person that I have become since I started spending all of my time in front of a screen. I spend my waking hours switching from fake controversy to stupid priorities pausing long enough to dissect something useful, if possible, out of the rhetoric on the screen. 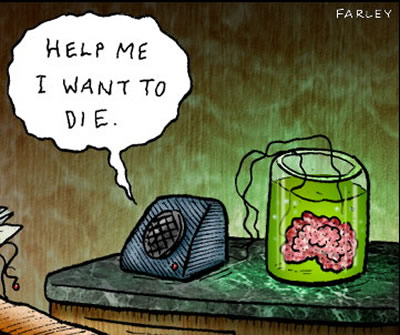 I don’t sit in the sun for hours. I rarely spend more than 15 minutes a day reading a book that I can touch with my hands. I recently bought a kindle and am rereading old, readily available SF on it. I am a brain in a bottle, stacked in a row. Can you tell I’ve been working in the cubicle farm for too long?

Outside of the torrent of screen life is the pace of publishing. I love it. We tend to line our titles up for a once a year (hopefully twice next year) launch around the San Francisco Anarchist Book Fair in March. This means that we are discussing manuscripts with authors now to finish in the next two months, to finalize in December, layout in January, and print in February to have on hand in March. Compared to blog-o-reality where the couple dozen people who check this regularly get a chunk of my thoughts a couple of hours after I start to have this this cycle is excruciatingly slow. Many of the people in my daily data flow sincerely believe that this aspect of life (print) is worthless. They extract no value out of the slow moving, muddy stream. They live in the rush (and the push and the land that we stand on is ours), the data rush, the drama rush, and the rush of the gaze.

I’ll wrap up my thinking about The Anvil other than to ask interested writers of review essays to get in touch with us. We would like to publish you. Interested readers we would like you to consider subscribing to the paper. If you do you will be helping support the project and make it easier to go to print more often.

I have been experimenting a bit with barefoot walking (with minimalist shoes). While I can’t imagine walking around the city in them, when I am at home, or hiking I am entirely in love with them. I think that the arguments about shoes being casts for our feet and weakening/atrophying our foot and lower leg muscles is entirely on point.

I started dialing into this because I tore some ligament in my knee (probably the ACL) a couple of years ago and haven’t been able to run with traditional running shoes ever since. I can still do cardio in the gym (which is basically an exercise cast for your whole body), I can still do everyday activities (including walking) but as soon as I add the extra motion of running in a couple blocks I am done.

Running as been the one kind of exercising that I have ever loved and I mean love L-U-V. As a teenager I was part of the cross country team and got into the whole package. Long runs, country runs, the competition, the solitude, endorphins, the whole package appealed to me. That was 25 years ago. Now I sit in front of a screen, motionless but for my fingers. I debate whether to watch one more hour of a program rather than be in my body. I need to run.

For a couple weeks I tried to run barefoot. It was fucking fantastic. For a couple of the runs I was reminded of the endorphin rush I used to get back in the day. I was reminded that I actually have more going on that just being a brain-in-a-bottle… so of course I injured myself. It has been two weeks since then waiting for my foot to heal (no break, just something that feels like a bruise). I realize that my hope to jump up to 10 miles a week isn’t going to happen quickly. I am fragile and fat. This thing that I know is going to nourish me in exactly the way that I want to be nourished right now is just out of reach.

Couple that with the misery of a routine I am tired of and I am not in a great place right now. I am just watching the days go by… waiting.