With all the writing I’ve been doing about Letters of Insurgents the past few months I haven’t shared what is sharable about the roast that happened for my 40th birthday. I will start with an entry from my friend Artnoose. She is about to start work on a major tattoo for me so I will not say anything curt about her entry (which was read in absentia since she lives in Pittsburgh). 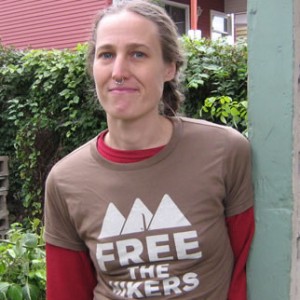 Here I am, roasting from a safe distance. And I know what you’re saying— “Artnoose? But she’s a cream puff! She’s way too nice to write a suitably scathing roast.”

And you’re right. I am too nice. No reason to fault Aragorn! for that, though. He did his best.

I met Aragorn!at the Burley House in San Diego around 1992, or maybe the year before. Boy was he a jerk back then. And me? I was busy having my mind blown by the collective house situation, especially— and get this— house meetings! I was totally enamored with them.

At the time Aragorn! was playing computer games (Wolfenstein?) all the time and sharing a bedroom with a few people who as far as I could tell he wasn’t related to or sleeping with. That was also mind-blowing.

Also as far as I could tell, Aragorn! could win any argument, and even back then, I was never sure if this was a positive thing or not.

Still, I observed his argumentation style, even when I seemed asleep on the couch while he and my boyfriend at the time got into debates late into the night. I want to add a few more things about this time in history before jumping ahead. One is that Aragorn! and Chuck were the first people I met who had septum piercings. The other is that Aragorn!’s gaming name was Chomsky, and I think that my questioning of this name I-had-never-heard-before spawned a verbal introduction to anarchism.

In 1993 I got my septum pierced, moved to the Bay Area, made a trek to Bound Together to purchase Living My Life, and began calling myself an anarchist. I mention this because I suspect that Aragorn! was probably the unwitting focus of this turn. I didn’t see him again until I think 1995, when I almost literally ran into him in the hallway at the 20th Street House, where I was dating one of the residents. We exchanged hellos, he didn’t remember my name, and after a few moments of silence, he said, “Well, no reason for us all to stand here being uncomfortable,” and left.

I probably saw Aragorn! off and on for a few years after that (with him forgetting my name consistently), during which time I had begun attending the reading group at the Long Haul. The debate education that had begun at the Burley House continued as I watched Lawrence battle friends, foes, and ideologies every Tuesday night for years.
At some point a new influx of people began attending the reading group, and Aragorn! was one of them. It was a turning point for the reading group but also my own life as well, as the greater circle of friends around these new people were to become my close friend base.

How this happened was through a difficult situation I found myself in. I was scared and I didn’t feel like I was getting support from the people around me. Aragorn! stepped in to lend a hand, and the thing that I always remember is that he didn’t have to. He made the choice. Other people stepped in too, and it changed the way I thought about friends, even though recent events might suggest otherwise. A true helping hand is one that’s extended without being forced, and it’s unfortunately rare.

Aragorn!was pretty solidly in my life from then on, and I can’t count how many times I’ve had to defend my friendship with him. We’ve also gotten into some rows ourselves, about who I date, how much I kiss people in public, the proper format to submit graphic design to a letterpress printer, and ineffective approaches to storming into virtual buildings armed to the hilt. This last bit is most dramatically illustrated in the moment when during an epic game of Counterstrike I kept getting picked off (probably by Mike K.) in the first few seconds of every round, and Aragorn! yelled out, “Artnoose! Could you pleeeeeease try to not be so fucking USELESS?!” I think I stormed out, but years later I got major cred on tour because there’s that Network of Terror song “Debacle at the LAN Party” and I could actually say that I had been an instrumental player at one.

So there you have it. Later I moved in, shit went crazy, I drew a comic zine about it, and eventually I left town. I still consider Aragorn! one of my best friends, even though we hardly ever see each other. If nothing else, I have a septum ring and Letters of Insurgents to thank him for. Oh, and a few dozen unfinished Kriegspiel boards. Maybe LBC will put them on sale or something…}

One thought on “Pieces of a roast – Part I”